From DiscFerret
(Redirected from Main Page)
Jump to: navigation, search

The first prototypes of the DiscFerret hardware are now in the hands of developers and we're now working on fixing the last few remaining issues and putting the DiscFerret into production. Keep checking back, and feel free to join us in #discferret on irc.freenode.net or on the DiscFerret e-mail discussion list

DiscFerret is a combination of hardware and software that allows a standard desktop computer to read, analyse and decode the data on almost any floppy disc, and most MFM and RLL hard disc drives. This includes standard formats like PC DOS, but also more unusual formats like AmigaDOS, Apple (II and Mac GCR), Commodore 64, and also more esoteric formats like those used on the Intel MDS/ISIS, Northstar and Sirius-Victor 9000 platforms. Imaging is performed at the lowest possible level -- that of magnetic transitions, which allows everything which can be represented on-disc to be imaged for later analysis. 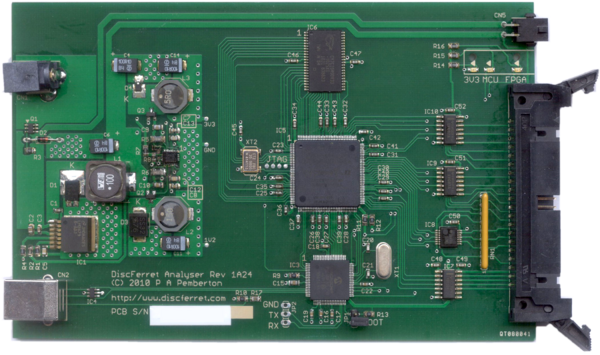